There have been 4 near death experiences in my life.  The first came at the age of 20.  I was so unhappy with my life, love seemed like it was never going to work out for me, nothing seemed to come together.  I hated my life enough to want to take my life.  However, spirit had other plans for me and I was left with no option but to surrender since I couldn’t even succeed at suicide.

The 2nd time was when I was going through my first Saturn return and trying to open a retail store.  I was headed home from visiting family for the holidays, hit black ice on the road and spun off the road to find myself suspended in a tree branch.  I completely left my body and could see myself lifeless in my car and then found myself communicating with some Angels about whether to leave this life or stay.

The decision was made that I would return to serve as an earthly angel to people who struggled with believing in God or Spirit.  I was returned to my body to find an off duty officer pulling me out of the passenger side of my car.  People showed up in my life for me to help and kept telling me I was an Angel and felt that I helped save their life from a miserable existence.

The 3rd time came when I was in my 30's.  My body started having all kinds of difficulties.  I went through numerous doctors with no one able to figure out what was happening.  Finally, one day during a consultation I discovered that not only did I have problems with my ovaries, but that I had extreme severe adhesions in my body that had caused all of my organs to become stuck together, my colon was knotted and kinked, and my gallbladder was ready to erupt.

I was informed that there was no medical reason for me to be alive, and that I should have died about 11 years prior; and that I should keep the doctors card on me in case something erupted before they could operate, which they had to wait for a little over a month due to exploratory outpatient surgery that had been recently performed.  After the efforts of 2 specialists and about 7 surgeries performed in 6 ½ hours a new life awaited me.  It was this time that really triggered a strong awakening for the reality of how suddenly life could be taken away.  Even my parents were concerned whether I would survive this time.

This instance in particular motivated me towards my path of persistence to become a living example for creating a spiritual life.  It triggered a strong desire to become more understanding of others and the challenges that they deal with, especially those that the rest of the world cannot see, and the value of every moment of every day.  Most people had no idea of the challenges I faced when I was ill because they couldn’t see it.  How many people around you are dealing with challenges that you cannot see?  Unknown to me I had found my mission in life to help others change their lives through compassion.

The fourth time was after a hard year of being on the road.  The stress had caused huge chunks of my hair to come out.  I had lost my dear traveling companion Orli; a cat that I had rescued from going over a waterfall and traveled 1 1/2 times around the US with me.  She died of Kidney Failure.  My mom passed away 2 months after my cat, and I was pretty much living on a prayer financially due to a strange set of events during the first half of the year.  It led me to land in Sioux Falls, SD.

I knew as Winter came on it would be cold.  I was in a place where I didn't know anyone, no family, or anything.  Still recovering from the first part of the year financially, I was still not in a position to drop $900-$1000 a month for living.  Circumstances were such that that is where I was going to have to be.  Word leaked out that I was surviving in a vehicle as Winter came in; and it wasn't long before people came to pull together and tried to do what they could to get me lodging.  However, paperwork takes time; and didn't happen prior to the -30 to -40 degree temps.  I remember laying down one night and as the freezing air entered my lungs, thinking this could be it.

I remember thinking, if this is my time to go then I surrender to that; and I imagined myself in the most loving embrace of Spirit.  I let myself feel that warmth, and purest of loving energy and then released.  I will never forget how I could feel things shutting down when that cold air entered my lungs.  I remember being in a completely different space immersed in this loving warmth, knowing that again I had left my body.  Imagine, my surprise to awake to my alarm the next morning.  When I arose, I did so with a strength I had never felt before.

Holding Integrity During A Crisis - In this first episode of the Awakening Now show, Richard Oliver and Jared Walters talk with Jesse An Nicols George about her overwhelming experiences that will inspire anyone who has fallen on difficult times.  https://www.youtube.com/watch?v=3BfNGUvsclg&feature=share

› The Path To Here 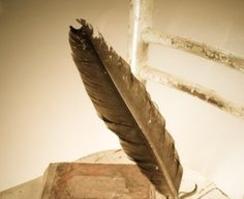 Besides the experiences that I faced growing up, there were some real life changing experiences for me.  These experiences included near death experiences, being date raped 7x in 1 year, losing my father, having family members and friends that have dealt with many challenges physically and emotionally and mentally, losing the cat Orli that I traveled around the US with, the passing of my mother, and nearly freezing to death.

Learn More On Me